Coalinga Healthcare District was established in 1946 by residents of Coalinga who banded together with one goal in mind: Ensure that residents had access to good medical care even though Coalinga was isolated from most other towns and cities. Below, is an excerpt from the petition signed in spring of 1946. 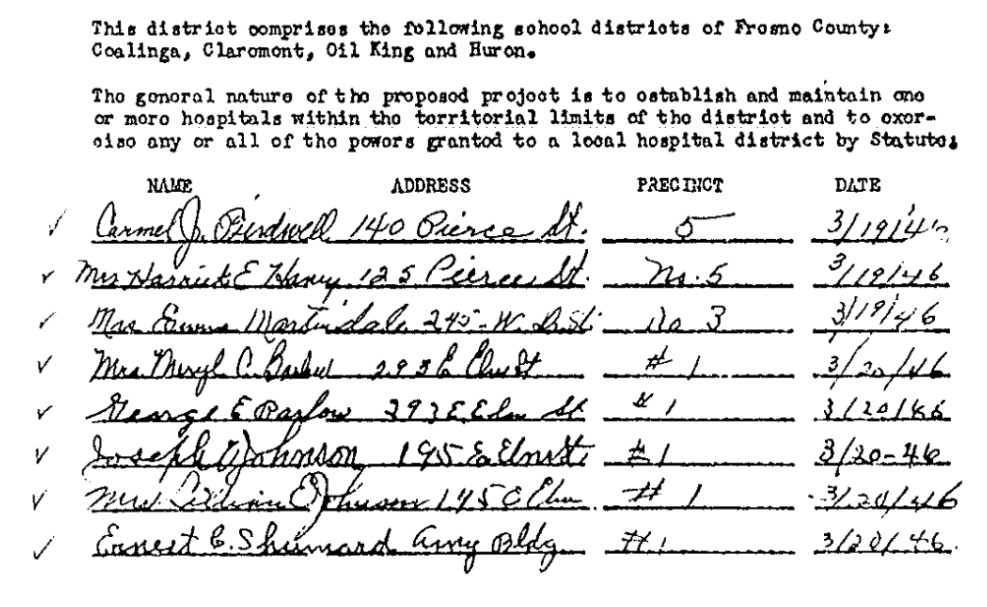 The Coalinga Healthcare District sits on the western edge of Fresno County, bordered by Kings County on the south, San Benito and Monterey Counties to the west, and various points to the northwest.

CHD is a group which was formed in 1946 when Coalinga residents petitioned Fresno county for a group to help people in the area to have access to healthcare. Longtime resident Carmel Birdwell was the first name on the document which was filed 75 years ago.

In 1945, the California Legislature created “Local Hospital District” with a newly crafted piece of legislation which authorized this move. Almost all of the existing health care districts were established in the years immediately following.

Like Coalinga Healthcare District, these other districts oversee and support access to quality medical care regardless of how remote an area may be.

Ideally, healthcare districts are also involved in other facets of community healthcare in addition to hospital needs. The authority granted to the districts by the state of California includes:

• Operating ambulance services within and outside of the district.

• Carrying out activities through corporations, joint ventures, or partnerships.

• Establishing or participating in managed care.

• Contracting with and making grants to provider groups and clinics in the community.

• Other activities that are necessary for the maintenance of good physical and mental health in communities served by the district.

The Coalinga Healthcare District is the entity that arranges for the District’s hospital to function and provide for the residents in the district. The hospital itself, though, is managed by American Advanced Management Group which manages several hospitals throughout California.

Coalinga Healthcare District holds board meetings each month on the first Tuesday at 6 PM. Meetings are accessible via phone call.  The meetings are held in the Pavilion Building adjacent to the main hospital facility on Phelps Street just east of Coalinga.

Public comments may be presented during the portion of meetings when residents may address concerns or issues not already on the board’s agenda. Comments are limited to no more than three minutes. No board action will be taken on any issues which are not already on the agenda in accordance with the Brown Act.

Below are the five elected or appointed representatives who serve as directors on the board.